After the accident involving the general cargo ship Pallas in autumn 1998, the German government developed a national emergency towing policy. The aim is to ensure that tugboats can reach ships involved in accidents as quickly as possible by strategically positioning them along the German North Sea and Baltic Sea coasts. This emergency towing policy, which came into force in 2001, is based on tugs owned by the German government as well as privately operated tugs which are chartered to the government.

To ensure that the German coast is best protected in the event of accidents at sea, our two tug shipping companies BUGSIER and FAIRPLAY TOWAGE 2001 joined forces in the Arbeitsgemeinschaft Küstenschutz coastal protection group. For safety reasons, the German government requires that if an emergency tugboat is not available (e.g. due to maintenance) an equivalent replacement must be provided as quickly as possible. For this, cooperation between the fleets was indispensable. Together we won the German government’s tender for private providers for the provision of emergency tugs and boarding teams for the North Sea and Baltic Sea. Since then we have chartered our tugs to the German government.

After the takeover of the BUGSIER shipping company by FAIRPLAY, since November 2017 all of the tugs previously operated by Arbeitsgemeinschaft Küstenschutz coastal protection group have been operated under the umbrella of the FAIRPLAY TOWAGE GROUP. Together we employ more than 750 people. As an affiliated group with shareholdings, we have a total of around 100 tugs – 10 of which are specially equipped fire-fighting tugs with 2,000 to over 20,000 hp and bollard pulls of between 25 and 200 tonnes. In addition to the fleet of sea-going tugs, we also operate special ships such as oil spill control vessels.

The most important thing besides powerful tugs are experienced crews, especially during emergency towing operations. Our crews therefore include dockers, salvage divers, salvage inspectors as well as oil and fire fighters in addition to technically competent crews. The technical know-how of our employees is thus very diversified.

Stationed in the North Sea 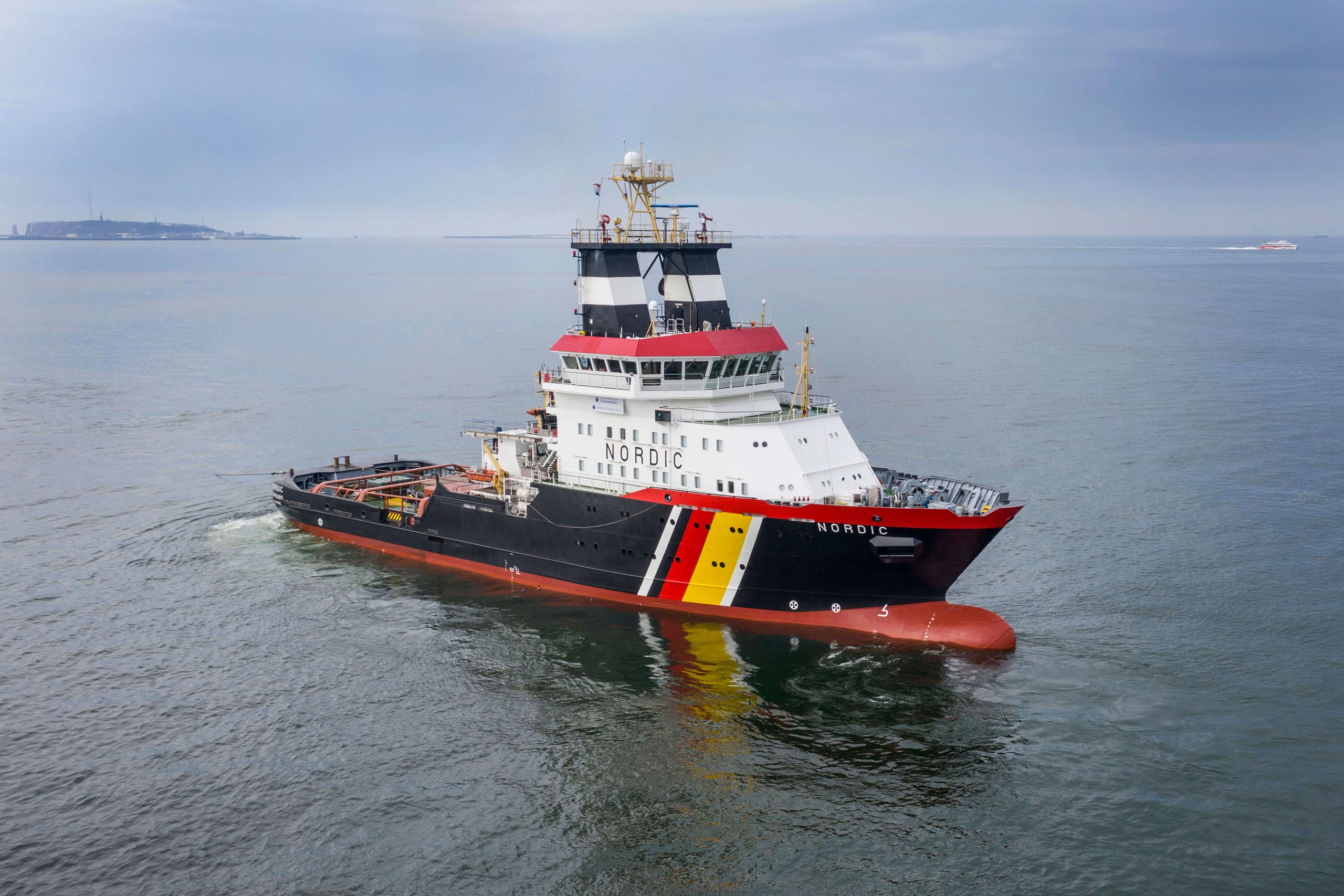 This special tug was built in 2009 at the former Peene dockyard in Wolgast. It has been chartered out to the German Federal Ministry of Transport for an initial period of 10 years for emergency towing work off the German North Sea coast. The German government’s own emergency towing capacities have thus been decisively strengthened. With over 200 tons of bollard pull and a speed of more than 19.5 knots, the Nordic belongs to the top class of these special ships. It is the first emergency tug in the world to be approved for use in hazardous atmospheres, operating independently of outside air. This can also help damaged ships in which toxic or explosive substances escape.

The crew of 16 includes a four-strong boarding team. In addition, up to 10 ship’s mechanic trainees with a training officer can be taken on board. The Nordic’s home port is Cuxhaven. Every three weeks the two regular crews take turns there and take provisions, fuel etc. on board for the next three-weeks of readiness at sea.

Emergency tug for the Baltic Sea 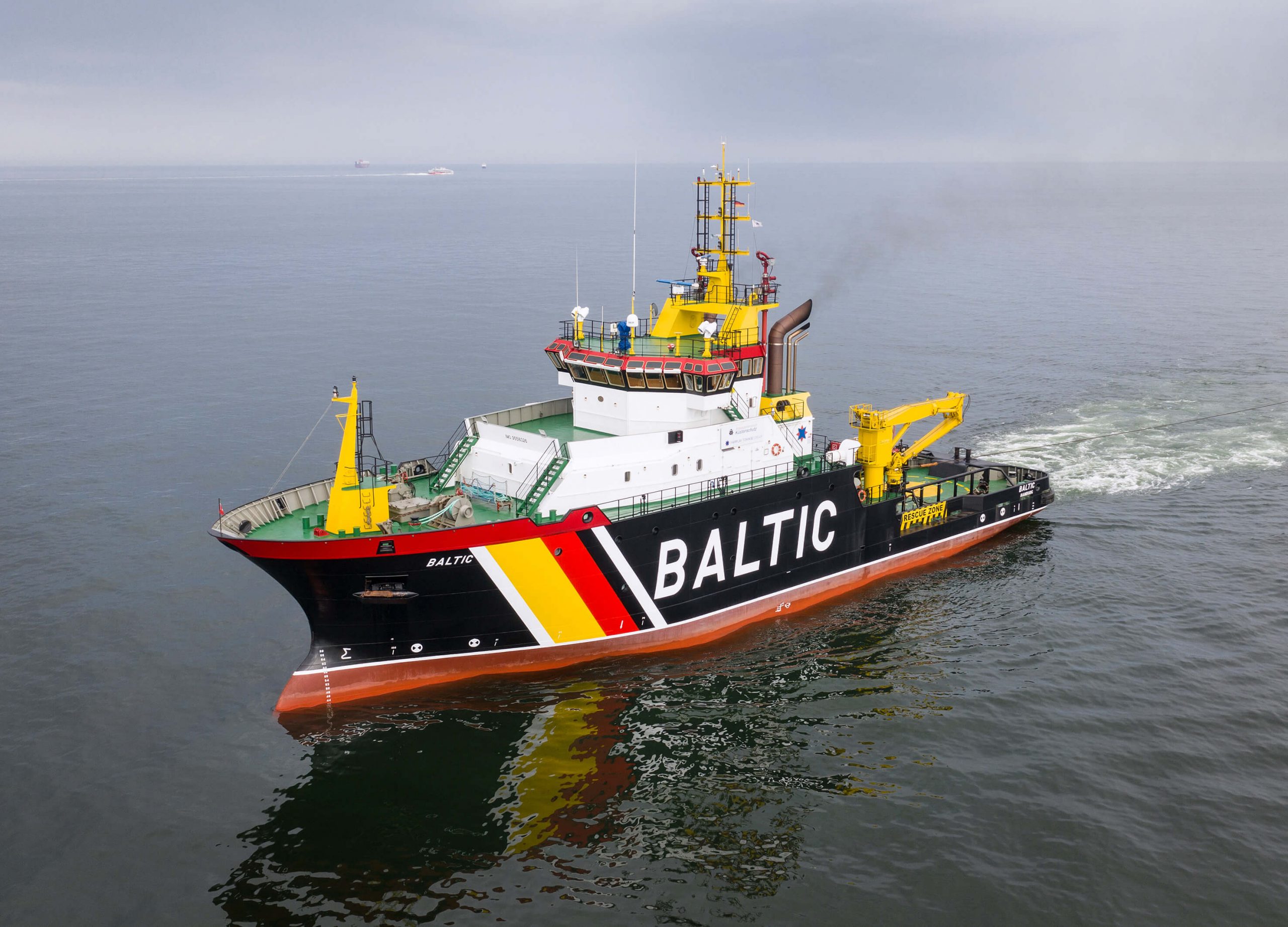 The Baltic was built at the Spanish Astilleros Armon dockyard in Vigo and was chartered out to the German government in 2010 for an initial period of 10 years. With well over 120 tonnes of bollard pull and a speed of more than 16.5 knots she is the strongest emergency tugboat stationed in the German Baltic Sea.

The crew of 8 consists of a captain, 1 nautical officer, 2 technical officers, 2 ship’s mechanics and 2 sailors. The Baltic’s home harbour is Warnemünde. The crew is changed every 14 days. Provisions and fuel are taken on board as required. 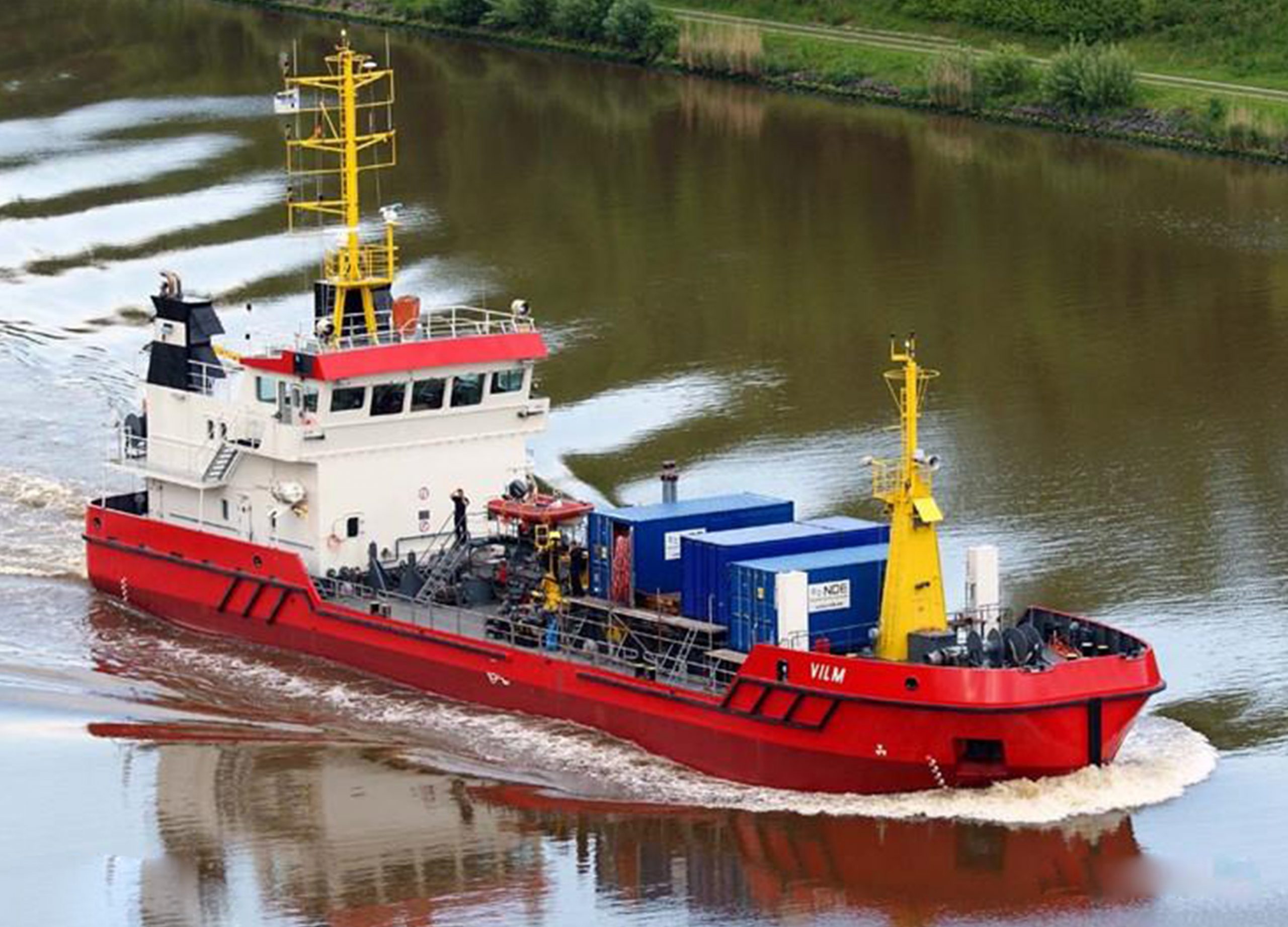 The Oil Recovery Vessel VILM is built for 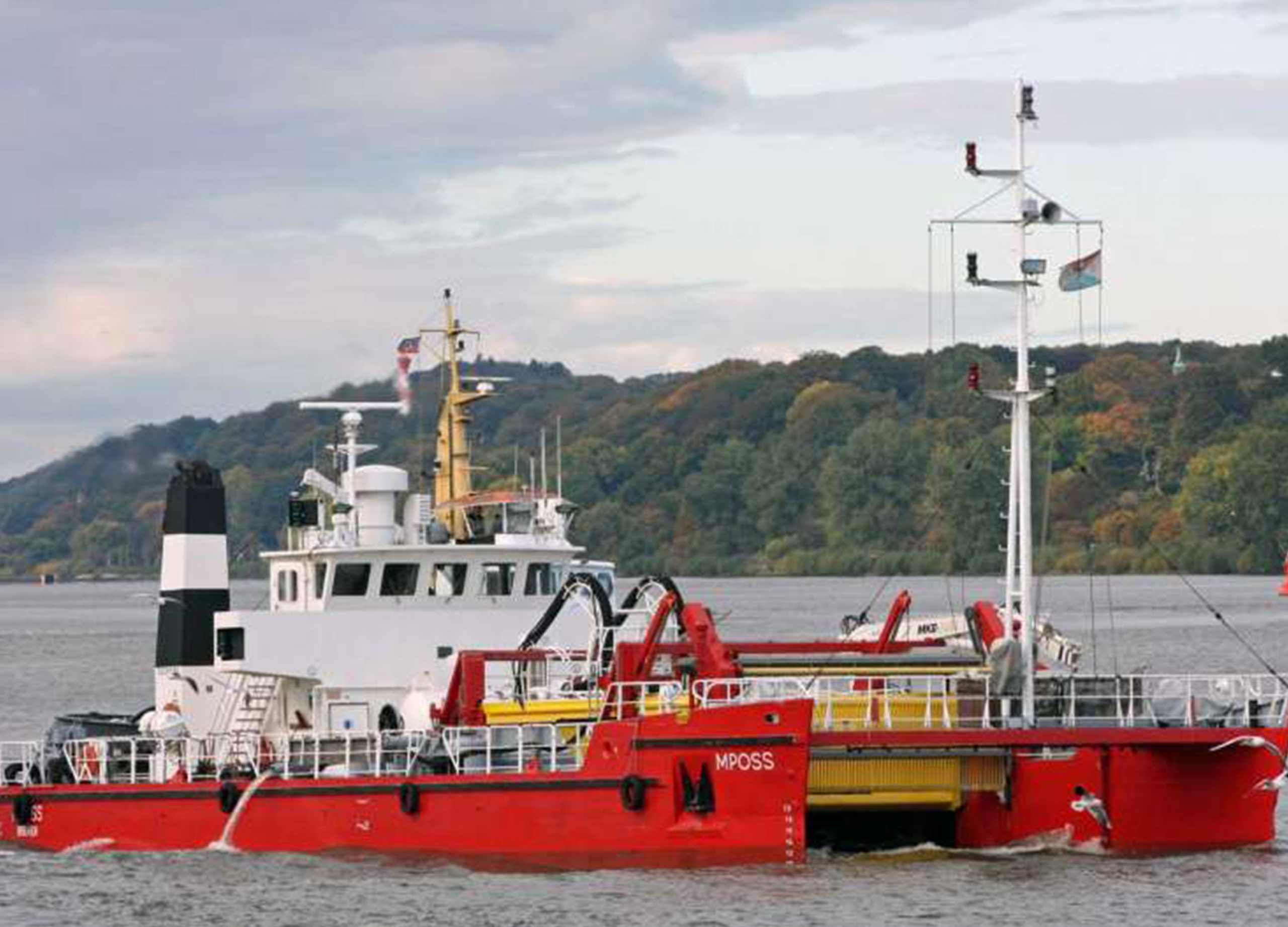 The multipurpose craft’MPOSS’, the name stands for Multi Purpose oil Skimmer System, is primarily designed for encountering Oil spills in shallow waters like ports, rivers, estuaries and mudflats. The extreme shallow draft and the two special Schottel propulsion give the craft high manoeuvrability to be deployed for cleanup Operations in confined harbour basins or flat embankments.
The craft is constructed in the form of an U-shapped hull, with a special oil skimmer svstem in the foreship and an elevating barrier grid.

From the skimmer sump the oil-water mixture is pumped into an integrated port and starboarg side gravity separation tank system which is connected in cascade mode. This novel comhination of the elevating barrier grid-, the skimmer- and the separation tanksystems enables the craft not onlV to handle oils with different viscosities and varying thickness of oil film, but also to remove tar balls, mousse lumps debris etc.

Since T & S Transport & Service was commissioning the craft “MPoSS” in the year 1986 it has successfully combated more than 30 oil spills on Cerman rivers and along the cerman coast.line. 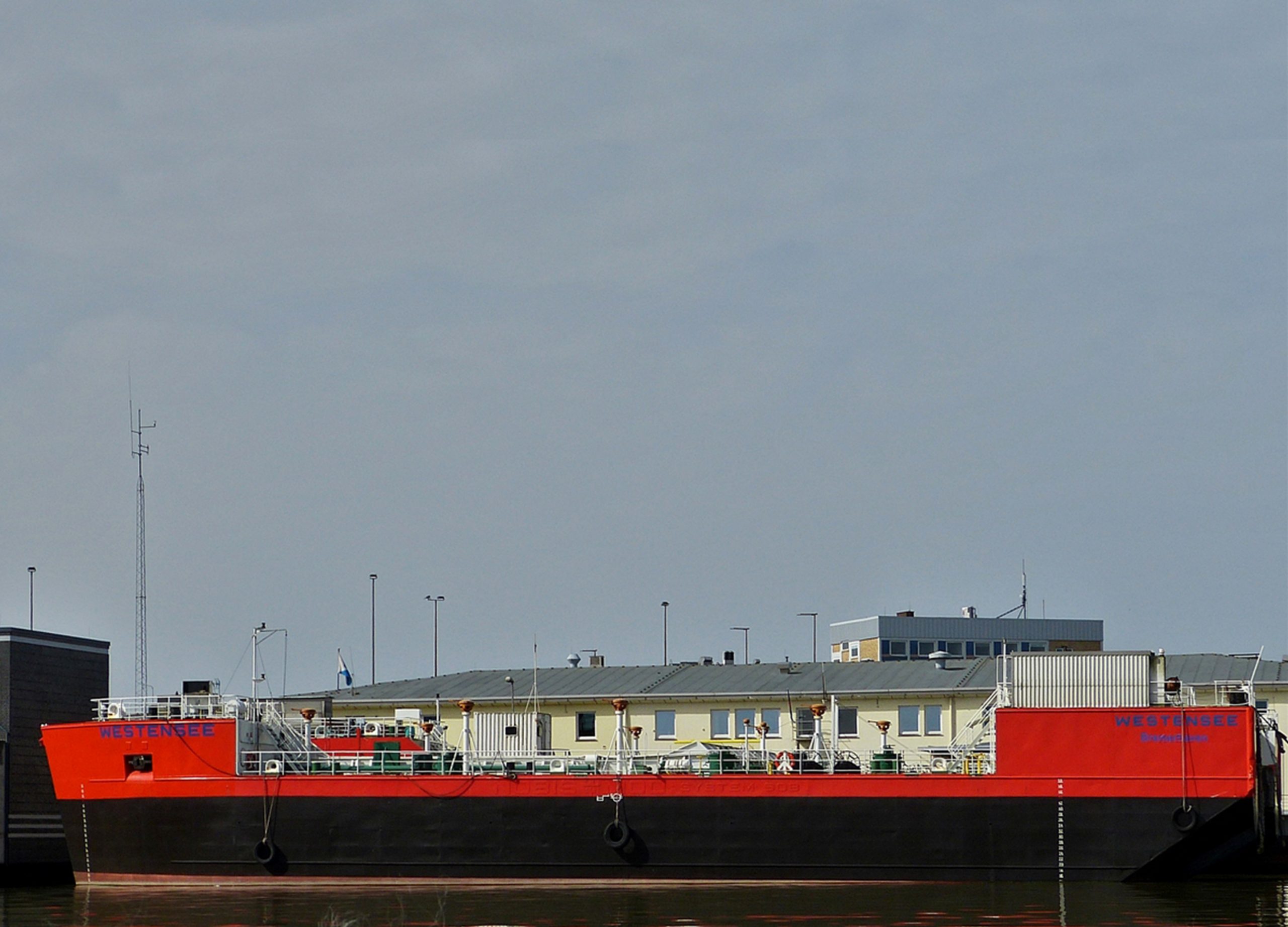 The oil-skimming catamaran is notable for its relatively simple and robust design. The craft to he pushed by a tug as she has no own propulsion. When combating oil spills the craft can be brought to the ideat skimming depth by taking ballast water. An adjustable sloping ramp (on the principle of a mobile oit dyke) is fitted hetween the two hulls of the catamaran. The oil-water carpet flows over the ramp into the collection trough and further on in the oil setting- and oil collecting tank system.

The inflow rate is controlled by the trim of the adjustabte ramp and by the speed of the pushtug. The large quantity of oil-water-mixture which can be taken and the deployment in offshore areas up to seas of 2.5 m makes this craft especially suitable for combating oil at 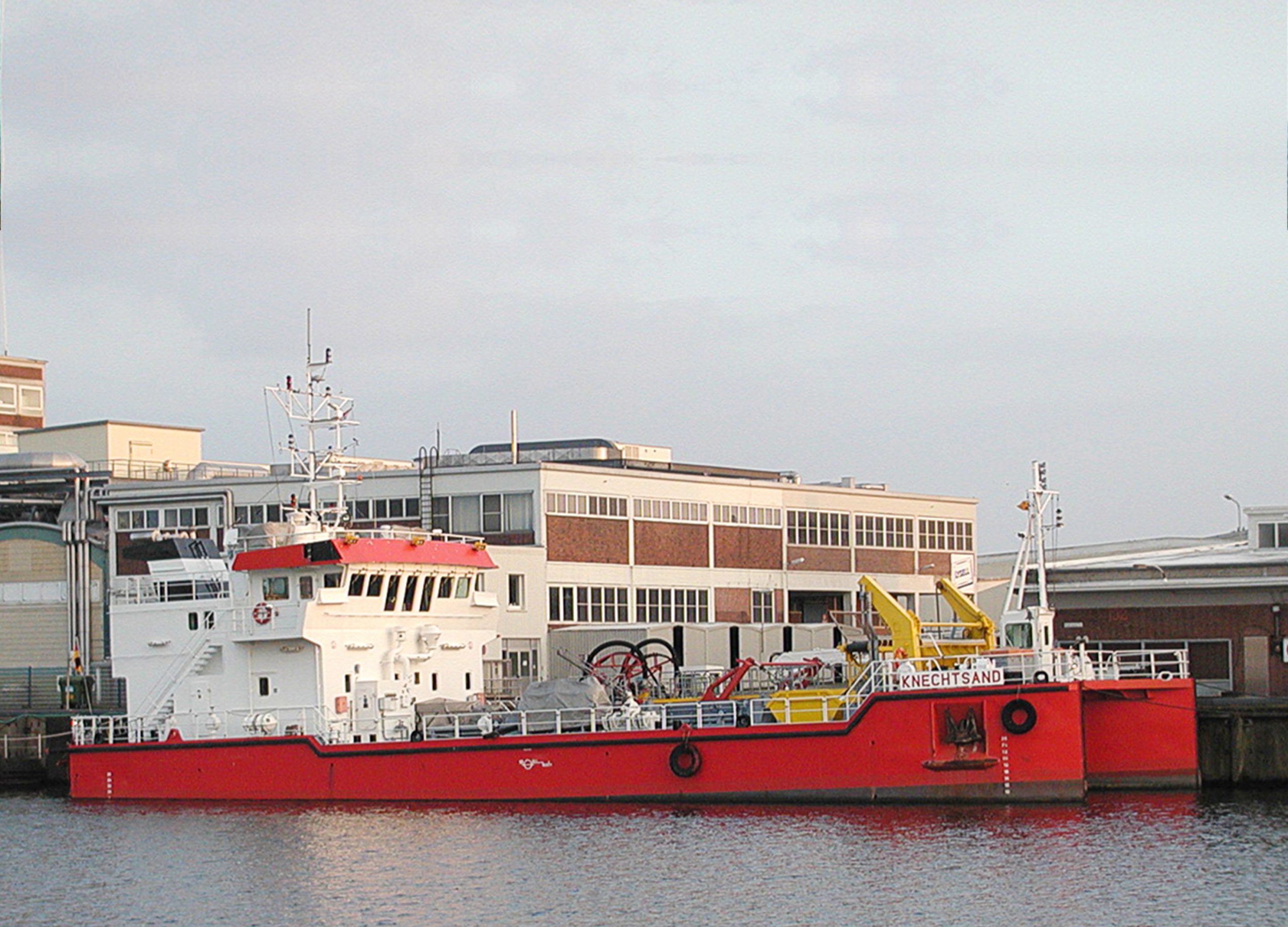 The special multi purpose craft “KNECHTSAND” in an enhanced design of “MPOSS”, comming into operation in the year 1994 as the outstanding unit of the German fleet.
The enhanced oil spill combating design allows “KNECHTSAND” also to be used for che­mical clean-up operations. For these special tasks following equipment has been instal­led:

Furthermore the ship is fitted with:

The superstructive is constructed as a “citadel”, in order to stay and operate in a chemical contaminated, hazardous atmosphere and is explosion proofed.
The successful and proved “MPOSS”-skimmer-, gravity separation tank- and elevating barrier grid-systems have been taken over. 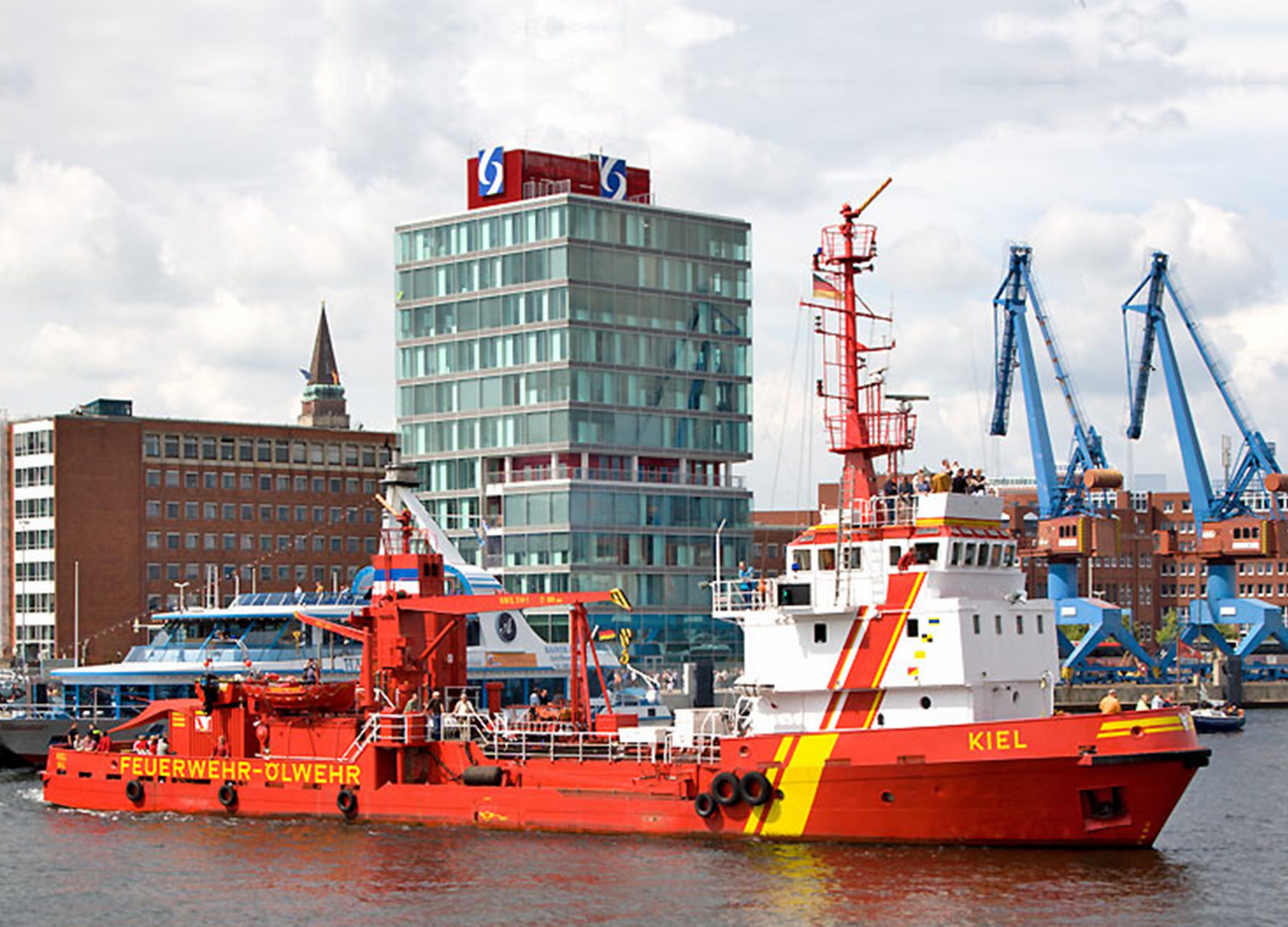 The ship was built according to the building regulations of Germanischer Lloyd for oil catchers and is suitable for the transport of substances with a flash point below 60 ° C.
This also means that the tanker regulations were largely taken into account.